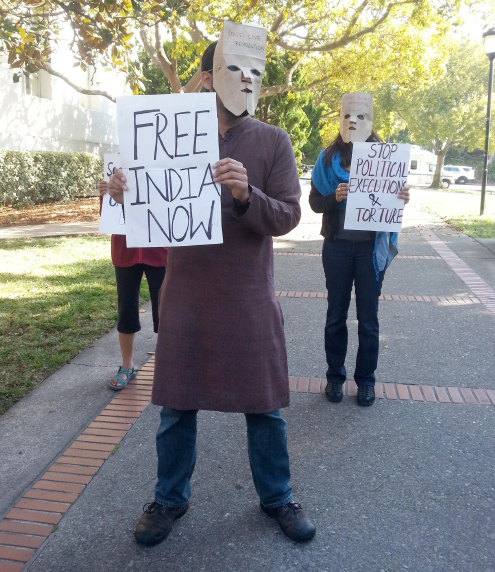 As part of their Year of No Flying,  Barnali Ghosh and Anirvan Chatterjee took a wide variety of walking tours. During the course of their year-long project they experienced everything from a tour of Old Dhaka in Bangladesh to an 8-hour trek through Rome. Navigating their way around Rome by walking through gypsy settlements, farms, and a construction site helped lay the foundation for their current project: Berkeley’s South Asian Radical History Tour .

As Ghosh recalls, the “walking tour we took in Rome was important for our thinking.” The tour was predominantly in Italian, and not catered to tourists.

“Sometimes people don’t really know the places they live in,” she says.

Ghosh, a landscape architect, and Chatterjee, a self-described tech-geek and founder of BookFinder.com are both part of the activist community in Berkeley. As Chatterjee says,“sometimes that has felt a little out of character with being South Asian and a model minority.”

The tour weaves stories in and out of the architectural places and spaces of Berkeley. Along the way, the tour unearths a new way of seeing Berkeley’s past through a series of radical South Asians. Though the tour began a little over a year ago, they have given about 35 tours to a total of over 500 people.

As Chatterjee says, “I really believe in the power of stories as a way of understanding.” He recalls reading Howard Zinn for the first time as an undergraduate at Berkeley, “It blew away my conception of politics in a country I thought I knew.” Through telling the histories of radical South Asians, Chatterjee hopes to “open up a few more possibilities for the future.”

While Ghosh and Chatterjee’s families both have roots in Kolkata, Ghosh grew up in Southern India and Chatterjee was raised in the suburbs of San Francisco.

Ghosh, grew up in Bangalore, India and went to Cal for graduate school 14 years-ago in landscape architecture. Ghosh sees the tour as a way to understand what makes Berkeley home, “The stories of the tour helped me see how I fit in.”

Chatterjee describes the tour as a part of slow travel, “Kinda like slow food. Moving more slowly,” and “going deeper into places you already live.”

The tour, which takes place on one weekend a month from March to November (at either 9am or 1pm) has not changed too much since its inception. Chatterjee notes that it has benefited from contributions of tour attendees, “There is nothing more amazing than telling a history, and having someone add their own experience.” Chatterjee continues to receive more information on the South Asian radical history of Berkeley, “There’s a thing that happens when everyone you know, knows you are really into a certain topic.”

How Radical is it?

In part, the South Asian Radical History tour was inspired by a radical history walking tour of New York. The aim is to avoid the typecast of Indian food and Bollywood.

When they first started people would ask: “Will you take us to all the great Indian restaurants?”

Instead, their stories look at the ways that people have organized within their communities, dating back to 1908. Some of the examples focus on early immigrants and their fight to overcome imperialism. The tour highlights narratives of hope and triumph and as Chatterjee says, “the audacity of being at a university and thinking you could overcome imperialism,” he adds, “There is something very radical about that.”

Ghosh points out the importance of dismantling the model minority stereotype, saying, “We are doing our part in balancing out what the perception of our community is, both internal and external.” Some people forget India’s radical history as a country that won its independence from the British, Chatterjee notes, but “we are revolutionary.” Both Chatterjee and Ghosh find shattering the model minority myths an important aspect.

For Chatterjee, the story that moves him “on a gut level” is the final story of the tour. A narrative about how Pakistani and Indian students at Berkeley high school dealt with the wave of violence after 9/11. “When these students were going to school they were taunted and called terrorists. One girl was beaten up,” Chatterjee says. Yet they did not stop going to school, “What really inspired me was the way that these youth organized and built alliances and solidarities.” The students organized a series of anti-hate teach-ins, “I don’t know if I would have been able to do that if I was 16 or 17,” Chatterjee says.

Ghosh and Chatterjee look forward to seeing similar tours across the country. They don’t plan on stopping anytime soon. “I see us doing this for a long time. As long as people keep coming,” says Ghosh.

Sound intriguing? Sign up to take the Berkeley South Asian Radical History Walking Tour and experience for yourself the counter-narratives to be told on the streets of Berkeley, California.