A Queer Aperture: Mia Nakano and the Visibility Project

Mia Nakano is a photographer, served as the founding photo editor for Hyphen Magazine, and is currently the lead artist for the Visibility Project. In August, Ochoa met with the photographer in her Oakland home to discuss the project. All images copyright of Mia Nakano, visibilityproject.org.

Last week, Germany announced that it will be the first European nation to put a third gender distinction on birth certificates. Nepal instituted a third gender citizenship certificate earlier this year and Sweden has recently established a third gender pronoun. These are exciting wins for the LGBTQ community whose mainstream US efforts have been ardently and monogamously wed to gay marriage at the expense of issues like trans healthcare and representation for (binary) gender non-conforming individuals.

Outside of the United States’ mainstream LGBT political agenda, these conversations are taking place. The questions that are being asked are not as easy as he or she, or a third or fifth option. Gender does not exist in a vacuum; it seems that in this society every body has a racial identity, a gender, and a sexual orientation. The intersections of these various facets of one’s identity determines one’s access to rights: appropriate health care, mobility, the right to live without the fear of identity-related violence- to name a few well worn examples. The social and political privileges a body experiences is not based on one dimension of identity, but a compendium of many.

The Visibility Project, founded and spearheaded by Mia Nakano, is an effort to engage an identity that includes race, diaspora, gender, and sexuality. The project  aims not only to deconstruct reductive classifications around sexuality and gender, but to contextualize them within the Asian American community.  The project gives a face and a name to an overlooked polis: queer Asian Americans. 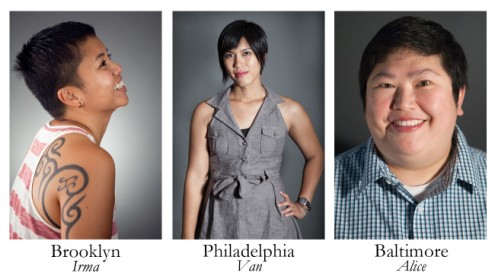 One question that  Nakano asks participants is, “What does visibility mean to you?”

Sasha, a twenty- five year old South Asian New Yorker answers the question: “Being visible means having a presence.  I know for myself, and for the queer API people that I am blessed to have in my life, we are constantly fending for our own presence.”

To Nakano, visibility is a creative act.  “Culture saturates our brains with ideas about  our identity, especially as it relates to race and gender.  To me visibility is about individuals shaping their own visual and actual language to express the specific intersections of who they are, so that other people can see them more clearly. Or, forget other people, so that we can see ourselves more clearly.”

When I asked her what she thought the biggest fight facing the Asian American queer rights movement was, Nakano answered,  “there are so many answers depending on who you ask and where you are. Everything is interconnected. There’s a swell in LGBTQ competency and understanding across many cultures. This means providing language support for people coming out to their loved ones who don’t speak English as their primary language. There’s anti-bullying,  immigration reform, job security, access to health care, addressing racism in non-white communities, and so on. All of these struggles can’t be presented in hierarchy. There is no separating any of our identities. They make up the whole of who we are.” 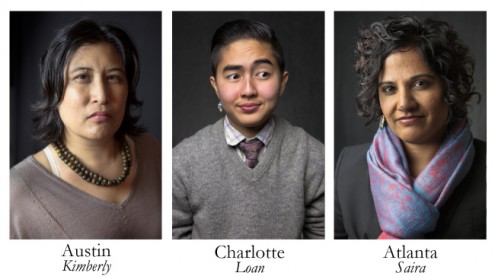 Nakano is fourth generation Japanese American. She lives and breathes photography; her one-bedroom rental is covered in photographs. Film and lenses are squirreled away next to the bath towels and her garage has been converted into a fully operational darkroom. As a photographer, she has spent many years framing her identity as a queer Asian American. In 2002, she was the founding photo editor of Hyphen Magazine and also the only out queer person on staff. She made it her business to ensure there was a consistent and meaningful representation of the LGBT community within the magazine.

In 2007, Nakano went to Nepal for a photojournalism internship at the Kathmandu Post. At that time, Nakano said, she was perceived as “quasi-butch, definitely queer,” although she has never subscribed to the butch/femme dichotomy. Concerned for her personal safety, she researched the LGBT community in Nepal and found the Blue Diamond Society, an LGBT group that provided support for people coming out as well as HIV/AIDS services. Surprisingly, Nakano found only one photo of anyone associated with the organization: the Blue Diamond Society’s Executive Director, Sunil Pant. One man seemed to represent the entire queer rights movement in Nepal. Once there, Nakano got to know the other members of the organization, and with their permission, began taking photos of the LGBT community there.

“Once I was back in the US, I wanted to do the same thing that I had been doing in Nepal. At that time, there was extremely limited visual accessibility to the Asian American queer rights movement.” Thus, the Visibility Project started. “The original call out was to a group of friends and community folks to have their photo taken to be a part of a portrait series. The response was a little overwhelming. All of the spaces got filled so quickly that more dates needed to get added in. I went into the project really uncomfortable and nervous. Shooting portraits and working with people was totally new, and I was more focused on that than planning for the future. I just wanted to ensure that my community was documented and visible.”

Nakano has interviewed public health workers, poets, university professors, sex workers, community elders who were organizing with Harvey Milk and through the AIDS Crisis, and young queers fighting in the Hawaiian sovereignty movement. Nakano has shown the portraits at the Oakland Asian Cultural Center, the Leeway Foundation in Philadelphia, and at the Smithsonian Asian Pacific American Center. As the project has gained momentum, so has her vision.

Over the last seven years, Nakano has documented over 130 female and trans identified Asian Americans in 12 states and 14 cities from Honolulu, Hawaii to Baltimore, Maryland. When she is touring, she sleeps on couches or the spare beds of friends, surrounded by a pile of lighting equipment and camera bags. She usually gives herself two days in a place and schedules to meet with ten to fifteen people per stop.  Her eventual goal is to hit every state, and to compile the Visibility Project into a book with photos and excerpts of interviews translated into the languages of the participants’ heritage.

The book will also contain a glossary of terms that the participants have used or created to self-identify, such as butch, transgender, masculine-of-center, and two-spirit. She hopes this resource will be useful to people coming out as queer or trans, and, for those who are grappling with how to bring the elements of their identity into focus. “There can be something really terrifying about being in a marginalized body and finding no one else around that looks like you. The same goes for asking yourself, ‘who am I?’ and not having the right words to know yourself. This book doesn’t offer any answers, but it will show an enormous diversity of possibilities. ”

Cecca Ochoa, an editor of the Apogee Journal wrote one of the best articles about the Visibility Project to date. A huge thanks to Cecca for the brilliant write up and thank you for your hard work.