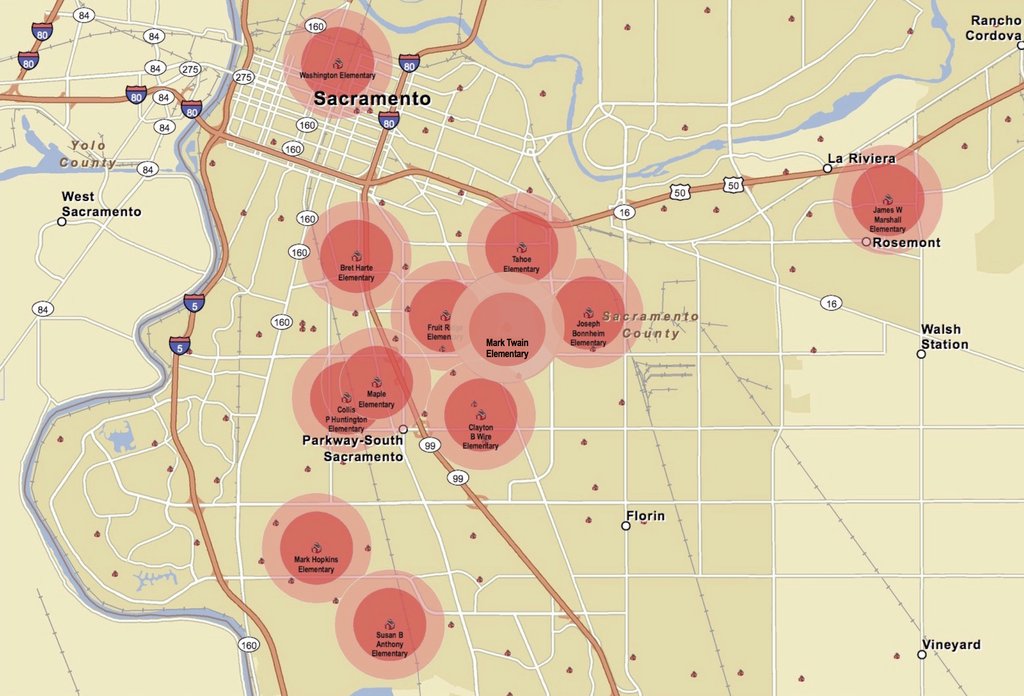 In January 2013, Sacramento City Unified School District and former Superintendent Jonathan Raymond proposed the closure of twelve (12) neighborhood elementary schools. Of those twelve, five (5) were quietly taken off the closure list prior to the final vote on the ‘wrong-sizing’ proposal. In February 2013, only a month after announcing the proposal, the Board voted to close seven(7) neighborhood schools in a controversial 4-3 decision.

In the two years since the school closures, 4 out of the 7 campuses have re-opened either as a charter school or a community center. The first school site to re-open was Joseph Bonnheim Elementary. Immediately following the closures, parents, teachers and community members came together to save their neighborhood school. To keep their school open, the community needed to come together to establish a community charter school. A small but incredibly passionate coalition of community leaders and parents raised money, passed around petitions and developed an organic proposal to re-open the school as a dependent charter. Finally, in 2014, the New Joseph Bonnheim (NJB) Community Charter opened its doors to a new cohort of students. NJB remains the only public school in Northern California with a special emphasis on agriculture. A week ago, NJB celebrated its second year and we’re thrilled to see students back at Bonnheim.

For over 40 years, La Familia Counseling Center has been a fixture in the South Sacramento community and a hub for Sacramento’s Latino community. In recent years, the expanding number of staff and the growing need for services among Sacramento’s diverse populations made LFCC’s location on Fruitridge Road feel a bit cramped. In July 2015, LFCC confirmed a lease for Maple Elementary School to convert it into their new headquarters. By moving their main office to Maple Elementary, LFCC is better situated to expand its world-class services to the Maple and South Sacramento community. The only closed school outside of South Sacramento was Midtown’s Washington Elementary. During public testimony to oppose the school closures, one Washington Elementary parent remarked, “it doesn’t make sense to close a school in a community that is growing tremendously. More and more families are moving into the area and we will need a neighborhood school to call our own.” As it turns, she was right. With the population in Midtown exploding and new developments being built throughout the Downtown area, the need to re-open Washington became apparent when neighboring schools became overcrowded. With the help of Board Member Jay Hansen (who originally voted to close Washington) and Sacramento City Councilmember Steve Hansen (no relation), Washington Elementary will re-open in 2016 as a Science, Technology, Engineering, Art and Math (STEAM) school. One of the most beautiful locations in all of Sacramento, the Fruit Ridge Community Garden was at risk of being closed following the closure of Fruit Ridge Elementary. Thankfully, in July 2015, the Fruit Ridge Community Collaborative took over the campus and re-opened it as a community center to provide a range of community services including health and wellness, yoga, meditation, cooking classes and daytime activities for adults and seniors. According to their Facebook page, organizations have begun moving in and FRCC will open its doors sometime in Fall 2015. C.P. Huntington – A suggestion to re-open C.P. Huntington as a Camellia Waldorf Charter school was discussed; but as of September 2015, no formal proposal is in place.
C.B. Wire – The District converted the campus of C.B. Wire into a kitchen and food warehouse. No plans have been proposed to re-open the campus.
Mark Hopkins Elementary remains shuttered without any proposals to re-open the campus. HIP conducted a community survey to document the needs of the Mark Hopkins and Meadowview community. It can be found here: Mark Hopkins/Meadowview Community Survey Results.

7.  Hundreds of students left SCUSD after closures and never came back. District LOST millions of dollars as a result. When it was initially proposed, the District claimed that their closure plan would save $1.1 million (less than 1% of the total budget). This figure never materialized as more than 400 displaced elementary students left and never came back to the District that rushed to close their neighborhood school. (Source: SCUSD Planning Department. SCUSD Analysis of Students Gained and Lost Between 2012/13 and 2013/14). To make matters worse, the vast majority of displaced students were low-income, English-learners–a group that double qualifies under the State’s new funding formula for education funding. Instead of saving money, the decision to close seven neighborhood schools ended up costing the District millions in new LCFF education funding. Closing neighborhood schools did little to stabilize the District’s budget and exacerbated its declining enrollment.

8.  How are the students doing now? No one really knows. Much has changed since the vote in February 2013, including the appointment of a new superintendent, two new school board members and multiple senior staff transitions at the District level. Lost in the midst of all these changes is the status of the students who were kicked out of the neighborhood schools. How are they doing? How have they adapted to their new school? Are they getting the support they need to succeed? In the aftermath of the closures, SCUSD failed establish an accountability system that tracked students to ensure they receive the additional support they had been promised. 98.7% of the students that were displaced by the closures were students from low-income families and 2 out of every 5 students displaced was in English-Language Development. Multiple studies have shown that these students are most at-risk of falling behind in the event of a school closure.
To learn more about the school closures in SCUSD, check out HIP’s archives: Wrong-Sizing